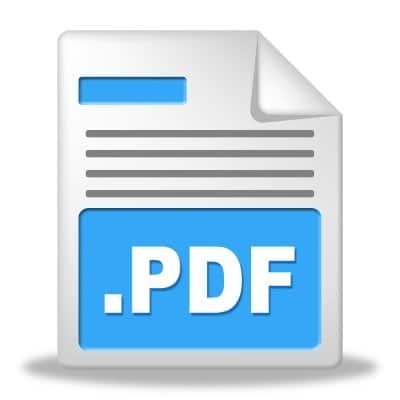 A representative from Cometdocs contacted me recently and asked me if I would be willing to write a post about their PDF to Word App.

I downloaded the App from the App Store and realized it could be very useful to many of our readers.

What is the PDF to Word App?
In essence, as its name suggests, the App takes care of converting PDF files (*.PDF) into editable Word document files (*.docx).

According to their representative, the new .docx document generated by the App will have the same layout as the original file, but will be completely editable in Microsoft Word or Google Docs. Scanned PDFs (for example, ones created with a mobile scanner) as well as large files are also supported.

The App is free to download but conversions take between an hour to an hour and a half to complete.

If you need to convert PDF files to Word documents on a regular basis and you do not have the time to wait, you can upgrade to lifetime of immediate conversions for $3.49.

Search for “PDF to Word” on the App Store. Take a look at this blog post if you need to refresh how to download and install iPad Apps.

You can also download the App by following this link:
PDF to Word

Once downloaded to your iPad, the App is very easy to use. I’ll walk you through a quick example below.

To try out the conversion, I emailed a PDF file to myself. On the iPad, I opened the Mail App and tapped on the PDF file attachment.

On the top right corner of the screen where the PDF file displayed, I tapped on the sharing menu

and then selected “open in PDF to Word”. 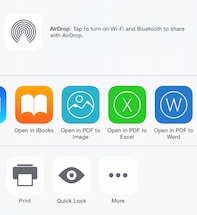 The PDF to Word App opened and showed the following popup:

I selected the Wait option. The conversion started and took about an hour to complete. I was able to do other things in the meantime on my iPad while the process was ongoing. iPad showed me a notification from PDF to Word when the conversion was completed.

The resulting Word document file appeared on PDF to Word. I tapped on it and at first I was a bit discouraged because when I opened the file, it seemed as if one of the pictures did not convert properly.

I decided to email the converted file to myself so I could view it in Microsoft Word on my laptop. Once I opened it in Word, I was happily surprised to see that the PDF was accurately converted! In fact, I would say the quality of the conversion for this particular example was excellent.

PDF to Word is easy to use and can be very practical for a lot of people. While using the App I came up with some ideas for improvements. Here are my suggestions:

Other useful Apps from Cometdocs

While checking the App Store, I came across other similar Apps from Cometdocs. You may also want to try PDF to Excel, PDF to Powerpoint and PDF to Image.

As a side note, I downloaded PDF to Powerpoint and can tell you that the usage is pretty much the same as the one described above for PDF to Word.

On the Cometdocs website I saw they have Word, Excel and Powerpoint to PDF Apps coming out soon. I look forward to seeing and using those whenever they become available.

Was this review useful to you?
Please let me know by posting a comment below.