The other day I was explaining my mom how to do something on the iPad over the phone. After a few minutes (and some frustration on both sides) I realized that I never explained or taught her the basics of the iPad controls. I mean, where the cameras are located, audio jack, buttons, speaker, etc.

On this post I’m going to be showing you where the buttons and controls are using an iPad 2 as a demo. The new iPad has the same layout although the screen has a higher resolution. 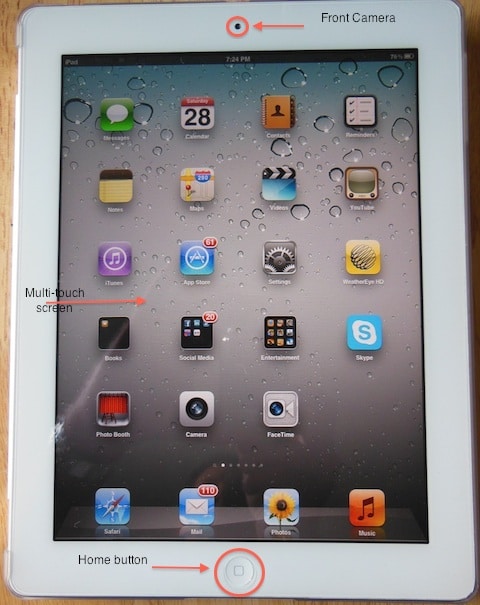 The iPad has a Home button on the middle bottom part. If you are inside an app and press this button you will be taken to the Home screen.

Then there’s the multi-touch screen that displays the content and let’s you interact with your iPad by touching it and doing gestures on it. If you want to know more about the iPad multi-touch gestures sign up for my email newsletter and get the multi touch gestures quick reference guide as a gift.

The front camera allows you to send your video while using apps like FaceTime or Skype. You can also take pictures of yourself with it and play around with them on apps like Photo Booth.

The side switch allows you to lock the screen rotation or mute the iPad depending on your configuration settings.

Volume buttons provide a quick and direct access to regulate volume for music, video or sound effects on your iPad. 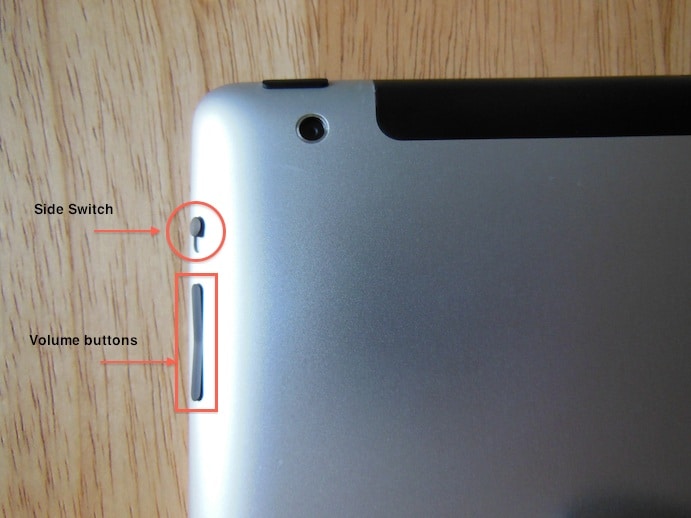 On some models ( 3G or 4G ) you will have a Micro-Sim tray. This tray holds the sim card that allows access to the data networks (I.e. AT&T, Rogers, etc ). 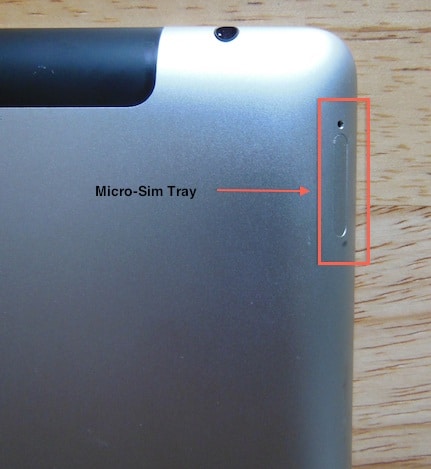 iPad Back or Rear View 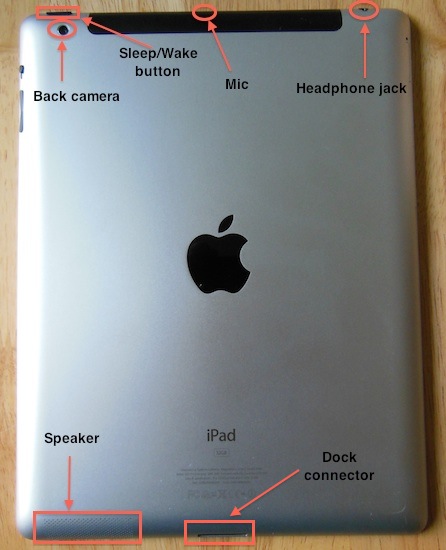 This button allows you to turn on and off your iPad, put it in standby mode and may be used for other purposes as well.

It is used by the iPad to capture sound for example when shooting video.

Similar as on the iPhone or iPod you can plug in your headphones here to listen to music or videos being played.

The back camera allows you to share with other people what you are seeing while in a video conference without having to flip your iPad. It also allows you to capture video which can be later uploaded to your computer or YouTube.

The iPad sound will come from the speaker unless the volume is muted and/or your headphones are plugged in.

This is where you plug in that white cable that came with your iPad and that allows you to connect it via USB to your Mac or PC.

That would be it… Until the next iPad comes out…

If you want to know more about the iPad multi-touch gestures, sign up for my email newsletter using the form on the top right and get the multi touch gestures quick reference guide as a gift.