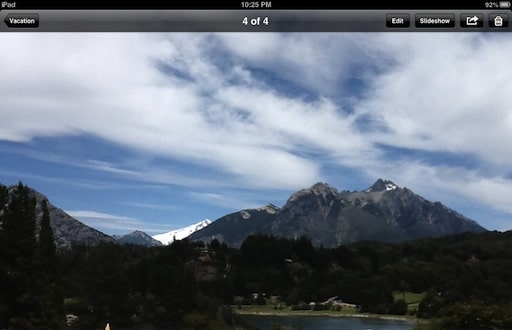 A question I often get asked is how to create a photo album on iPad. We all like taking pictures to help us remember special occasions or our travel adventures. We then download the pictures to our iPad and have to sort them into different albums to keep organized and to be able to track our favourites at a later date. By having each album labelled, it is so much easier to show our pictures and share our stories with friends.

So how do we go about creating albums on the iPad?


Today I will be showing you how to create photo albums and add your pictures to them.

Tap on the Photos App icon

Pictures taken with the Camera App get stored on the “Camera Roll” album. This is the default album that you will find the first time you open the App.


To create a new photo album, tap on the plus button on the upper left corner.

A dialog box will appear where you can add the new album name. Tap on “Save” to continue.

Once you type in the album name, iPad lets you choose pictures from your Camera Roll (or other Albums).

These pictures will get copied to the new album you are creating. Tap on the “Done” button when you are finished selecting the pictures that you want to include in the new album.

Tap on the “Edit” button on the upper right corner to edit the album.

This will allow you to edit the album’s name or to share or remove the pictures it contains.

Tap on the “Edit” button on the upper right corner, then select the cross on the upper left corner of the album you want to delete. 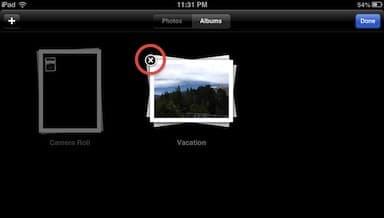 A confirmation dialog box will appear. Tap on “Delete” if you want to proceed. 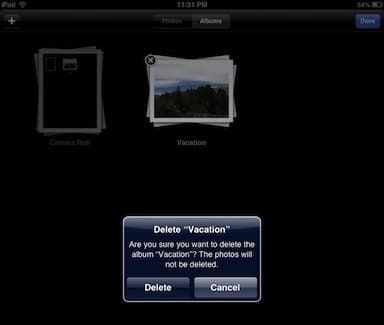 Tap on “Done” to finalize. The album has been deleted.
Let me know how it goes by posting a comment on the form below.

If you like this article, you may also like iPad Camera App on iOS 6 and How to edit pictures on iPad.

2 thoughts on “How to create a Photo Album on iPad”